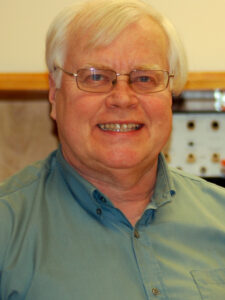 Dr. Hawkes has dedicated a career’s worth of service to the Science Atlantic Physics and Astronomy Committee, attending more than 25 Atlantic Undergraduate Physics and Astronomy Conferences (AUPACs) and serving as faculty advisor for those hosted at MTA. Bob says that part of what makes these undergraduate conferences so rewarding is their energy. The enthusiasm and optimism of the students involved gives these conferences “a more authentic feel than some of the established, professional conferences”.

Bob’s involvement with Science Atlantic (then APICS) began during his first year at MTA, when the university hosted the first APICS Science Education Conference in 1980. Bob describes the conference as “magical” and “full of excitement”, particularly in the way that it drew so many different contributors together. The success of the conference led to the creation of the Math, Science, and Engineering Education Committee, with Bob serving as its first chair.

Dr. Hawkes achieved his Bachelor of Science with honours in physics at Mount Allison University (MTA) (1972), both a Master’s degree (1974) and PhD in solar system astrophysics at Western University (1979), and a Bachelor of Education at MTA (1978).

After completing his PhD, Bob taught high school before joining the faculty at MTA, where he worked for 34 years as a teacher and researcher in both physics and education. Bob is a dedicated, highly involved educator and mentor; many graduates from his laboratory now work in academia or industry, and two of Bob’s former students, Kyle Hill (https://scienceatlantic.ca/hof/alum/khill/) and Ellen Milley, join him in Science Atlantic’s Hall of Fame. Additionally, one of Bob’s major influences in his approach to science outreach and education was his first-year Chemistry professor, Dr. John Read, who later became the Chair of APICS and was one of the first to be inducted into the Hall of Fame.

Bob believes that good teaching requires a willingness to learn along with students, as this creates a more engaging and exploratory learning experience. Throughout his career, he demonstrated this philosophy with his extensive use of experiential physics, allowing his students to learn through hands-on experience in collaborative groups.

As a researcher, Dr. Hawkes has made significant contributions to astronomy (specifically meteoroid structure), physics learning, and informal science learning. His accomplishments have earned Bob numerous honours, including being named a 3M teaching fellow, earning the inaugural APICS Canpolar Science Communication Award in 2001 for outstanding science leadership and outreach, and receiving the APICS Power Utilities Atlantic Science Teacher Award in 1991-92. Due to the significance of Bob’s research on meteoroids, the minor Planet 12014 was named Bobhawkes in 2002.

Over the last decade, Bob has worked on the first and second editions of a co-authored textbook, Physics for Scientists and Engineers: An Interactive Approach, which presents physics as an inquisitive, creative process. Now retired, Bob lives in Victoria, British Columbia, where he regularly explores science with his grandchildren and volunteers at a local elementary school, sharing his infectious enthusiasm for space and astronomy with a new generation.

We are pleased to recognize Dr. Robert Hawkes as an Outstanding Contributing Member for his many years of service and extensive commitment and dedication to Science Atlantic and the larger scientific community.