The following awards are given out annually at the Psychology Conference (Psych).

You can view the most recent winners, or see winners from previous years.

To be considered for an award, please visit the conferences and events page for details on how to register for upcoming conferences.

The Science Atlantic Communication Award is offered at each of the annual Science Atlantic-sponsored student conferences. The prize is awarded to the student who is best able to communicate a science topic to his or her peers. The award may be split into two prizes (one for an oral and one for a poster presentation) at the discretion of the judging committee.

The award consists of a letter of commendation, a cash prize and the opportunity to work collaboratively with the Atlantic Student Research Journal (ASJR) team to write and publish an article about the winner’s research.

Note on the ASJR editorial process: The Science Atlantic team will connect the winner with the Editor-in-Chief at the ASRJ. One of the ASRJ team members will work with the winner and direct them along the article creation process. Articles typically include an introduction of the researcher and their field of study, a description of the research and a discussion relating to the importance of the research. Once the article has been approved it will be added to the ASRJ queue for publication. Once added, it can take between two weeks and two months to be published, depending on the current rate of article production.

Each conference organizing committee determines the judging committee membership. Some committees involve students, some have a ballot vote of all conference attendees, and some are professors in the discipline.

The judging committee has the right to not give an award in any competition. If there are fewer than three students eligible to compete for this award at any conference, the award may not be disbursed. The decision of the judges is final.

The Atlantic Student Research Journal (ASJR) is a student-led initiative working to facilitate knowledge translation and develop the student-scientist network. Primarily, the ASRJ works with researchers and students to communicate their research, increase awareness and provide additional opportunity for student involvement. It also maintains a researcher directory, job board, and the Opportunity Centre. The ASRJ aims to inspire and support students and local researchers to develop the research ecosystem in Atlantic Canada.

Formerly called the NSERC Representatives’ Undergraduate Student Award, from 2004 to 2012.

This award is presented to the student (or students) giving the best research presentation(s) at an annual Science Atlantic conference.  A total of $400 is available for each conference.

The Award consists of a cash prize and a letter of commendation and can be split into oral and poster presentation prizes.

The Karen Nicholson Award in Neuropsychology 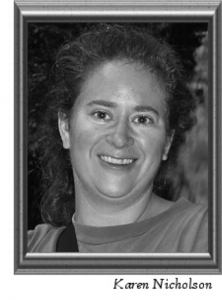 The Award will be made following a procedure determined by the Science Atlantic Psychology Committee.

In any year, if there is no suitable candidate, the judging committee has the right to not give an award.

The decision of the judges is final.

The award is a $100 cash prize which is presented at the conference. By accepting the prize, the winner agrees to have his or her name, presentation title, and abstract provided to the donor.

This award is sponsored by an anonymous donor.

Karen Nicholson (1971-2007) was a member of the Science Atlantic Psychology Committee whose research interest was in the neuropsychology of perception. Karen grew up in Lethbridge, Alberta where she received her Bachelor’s degree from the University of Lethbridge. She then completed her Master’s degree in Psychology with Dr. Doreen Kimura at the University of Western Ontario (UWO), followed by doctoral studies of the types of cues (shape, colour) that impact perception, supervised by Dr. Keith Humphrey, also at UWO.

Karen’s interest in the neuropsychology of perception was furthered during her postdoctoral work with Kevin Munhall at Queen’s University. She carried on to her own lab at Mount Allison University in 2002, where she was hired as an Assistant Professor. Karen passed away in November 2007, after a courageous battle with cancer.

Karen will be remembered as a committed teacher and a talented and energetic researcher.